An outstanding car in search of a new home 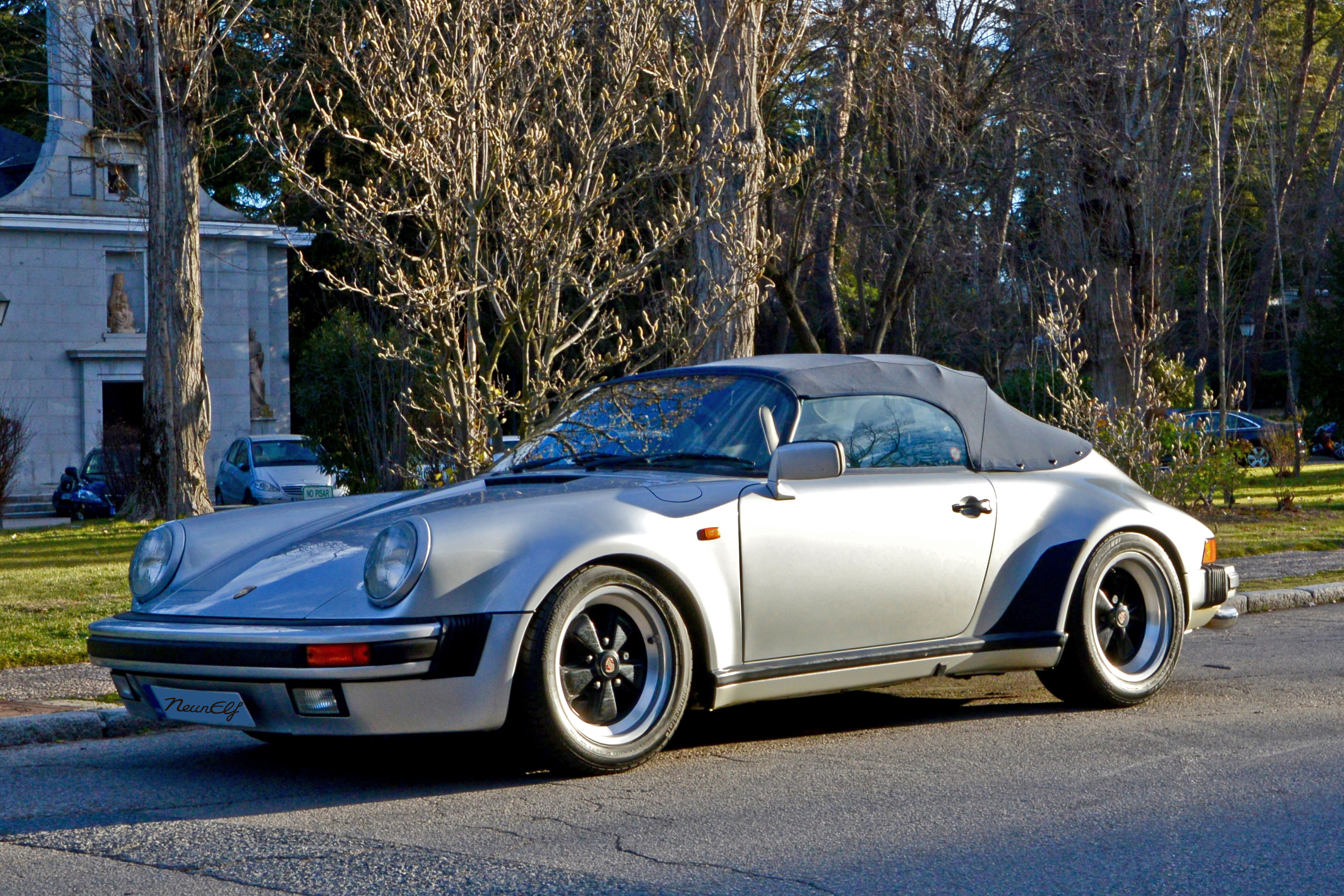 Back in the early 50’s, Type 540—known more commonly as the America Roadster—started the idea. U.S. importer extraordinaire Max Hoffman convinced Porsche it needed a lightweight convertible to effectively compete with the best from Jaguar and Austin-Healey. But production methods used to create the America Roadster’s aluminum body proved too expensive, and Porsche made only a handful of examples before its discontinuation in 1953.(1)

Porsche later decided to run with Hoffman’s idea by applying the formula to an existing production car. Starting with the steel-bodied 356 Cabriolet, the factory stripped trimmings and any luxury features found in the already bare-bones interior. The windshield header is lower than the Cab’s, and the entire thing is easily removable for racing. Weather protection was downgraded, with occupants making do with just a lightweight top for use only in emergencies. It was a stunning success, with very nearly 4,500 sold over its four-year production run. 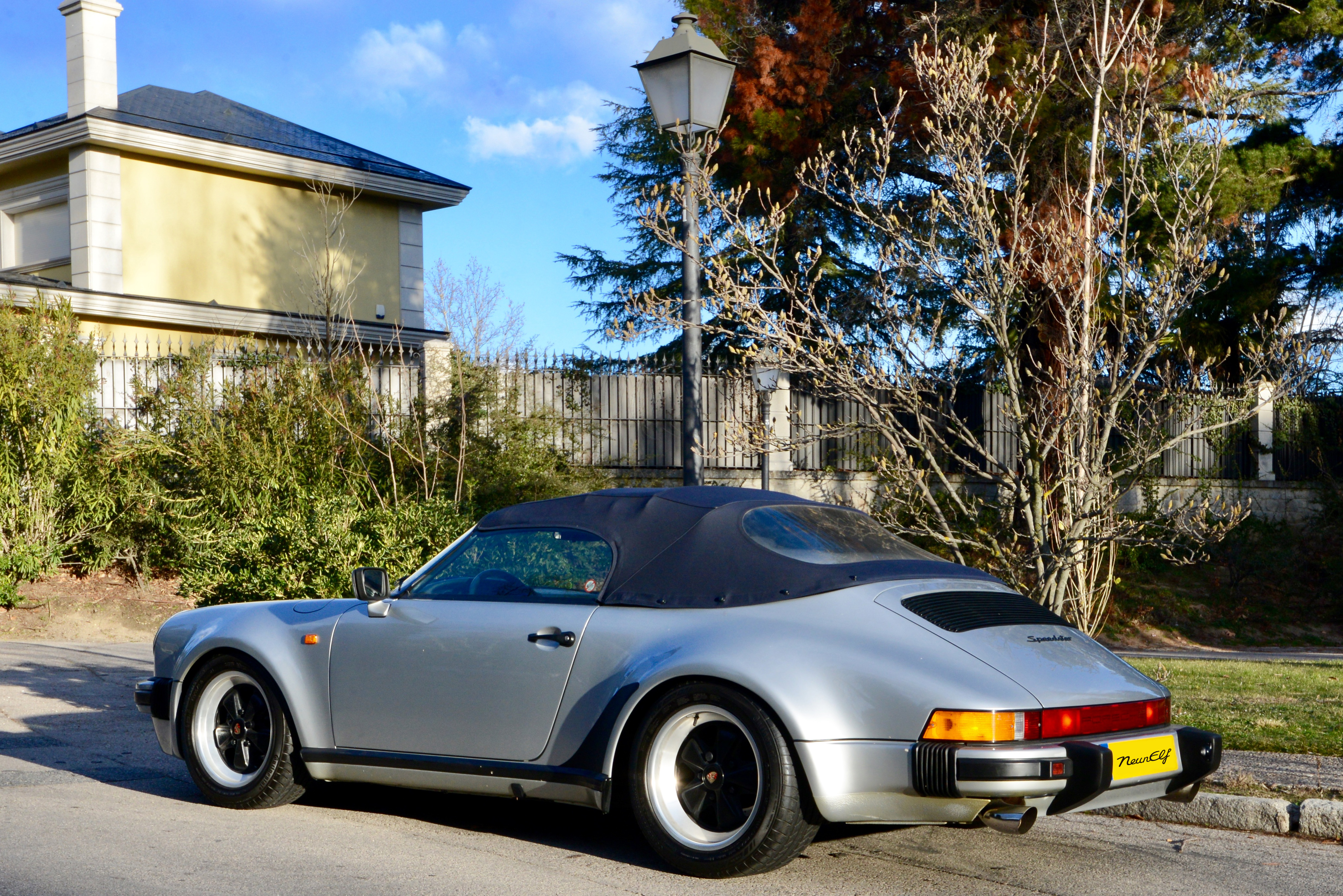 Three decades passed before the Speedster made a comeback. It was launched for the 1989 model year carrying direct aesthetic callbacks to the popular 356 model, including a raked windshield, two-seat configuration, and roll-away roof for “weather protection only” that stowed neatly under the double-bubble rear tonneau cover. The available bodies included a narrow look or a Turbo-style widebody, with the latter outselling the former by a huge margin. The car proved popular, with 2,104 sold—just 171 of them with the narrower body. 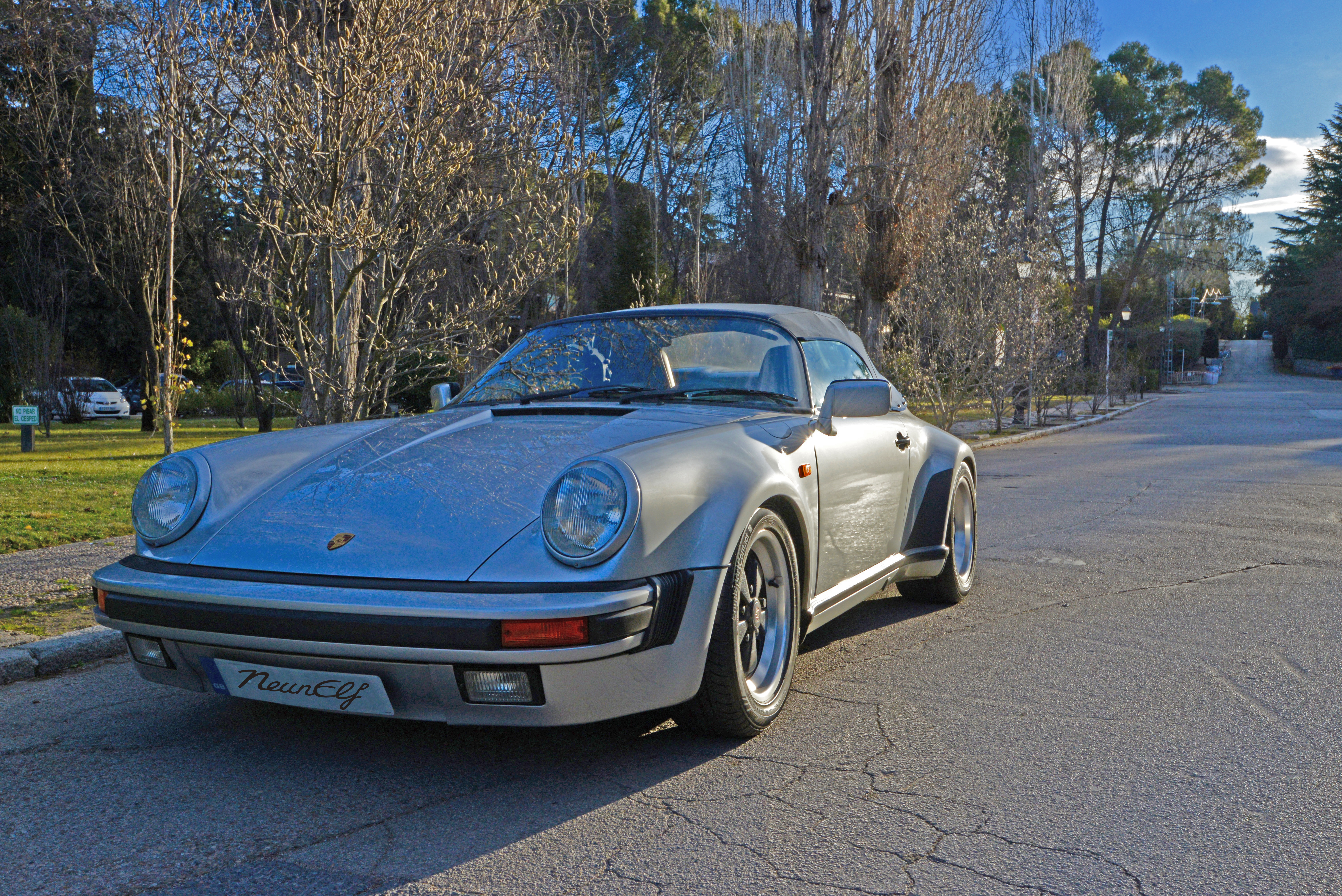 This 1989 Porsche 911 Speedster, one of the Turbo-style wide-bodies, is an extraordinary example of what was and still is an iconic car. First registered in the month of September of 1989, every detail in her exudes history, from the colour, Silver Grey Metallic, to the original archetypical black Fuchs wheels originally designed by Ferry Porsche, the double bubble behind the seats that covers the retractable blue top when down, the rich blue full leather interior that still retains that original scent…

Not to mention her 3.2 l flat six engine coupled with a G51 manual gearbox and producing 231 HP and one of the most exhilarating engine’ sound of all times. A pleasure to drive, a pleasure to look at, a pleasure that should be fully enjoyed by a discerning owner as she only shows around 25,000 miles on the clock. 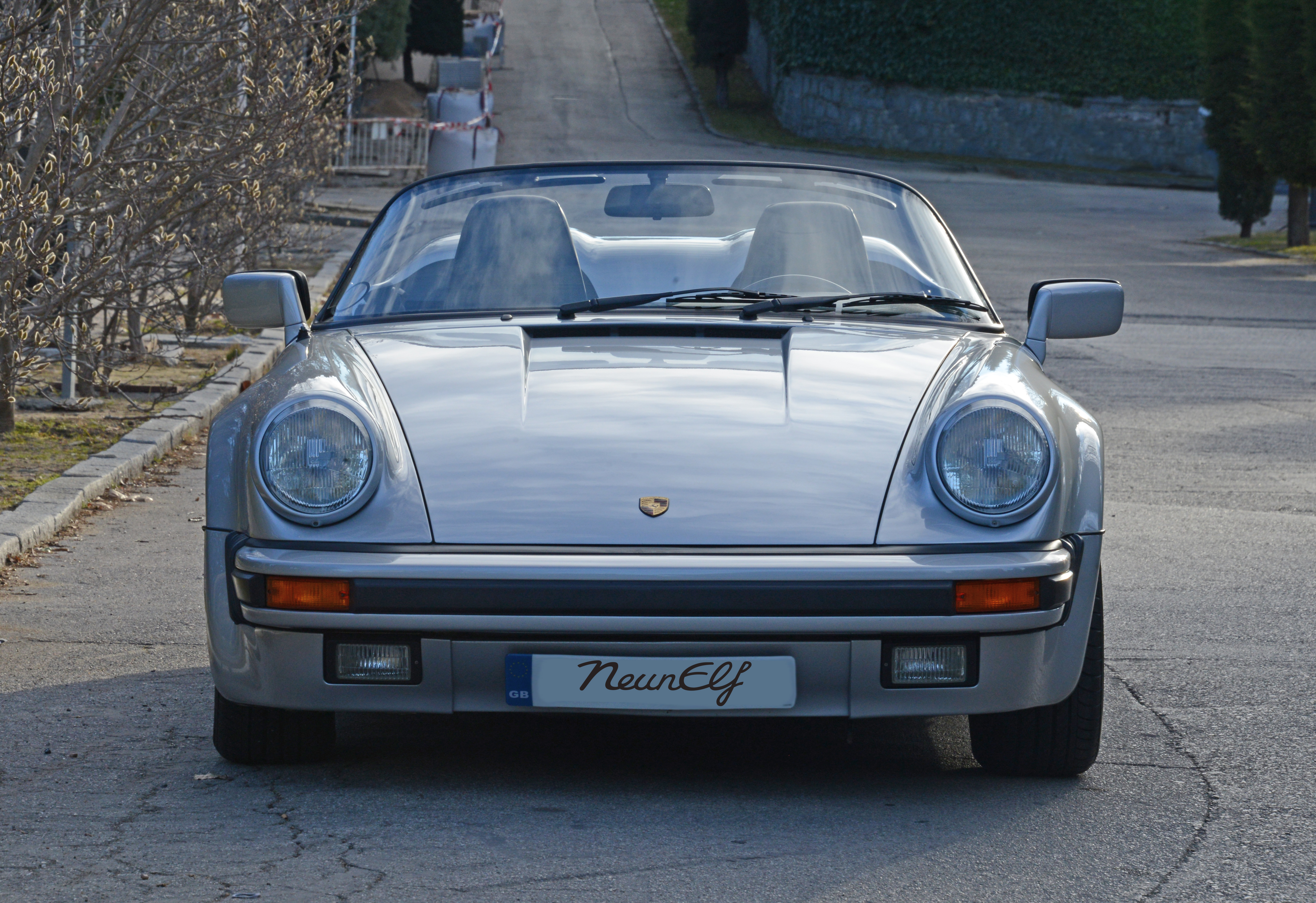 The agressive 911 front view is further enhanced by the low cut windshield exclusive to all Speedsters. 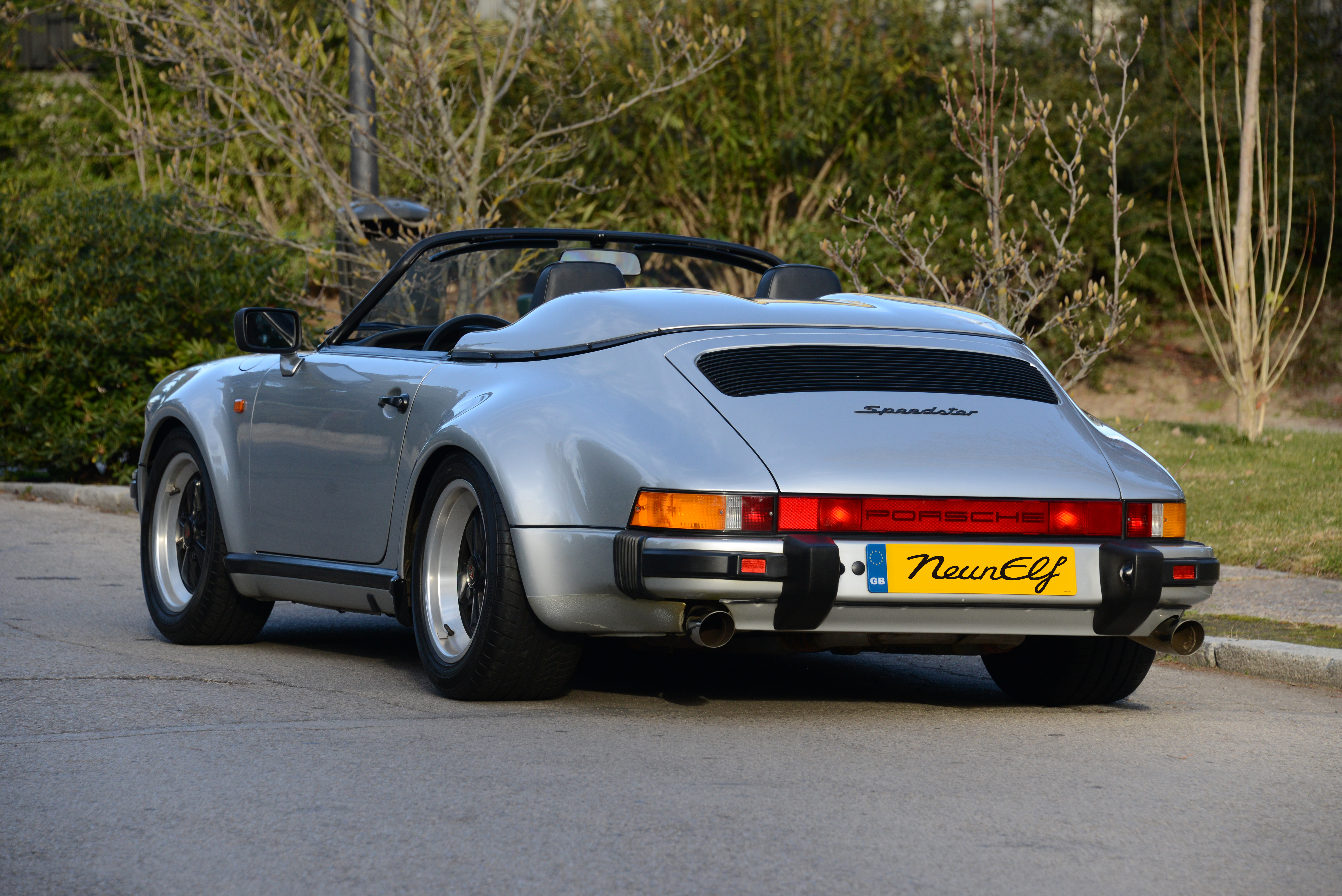 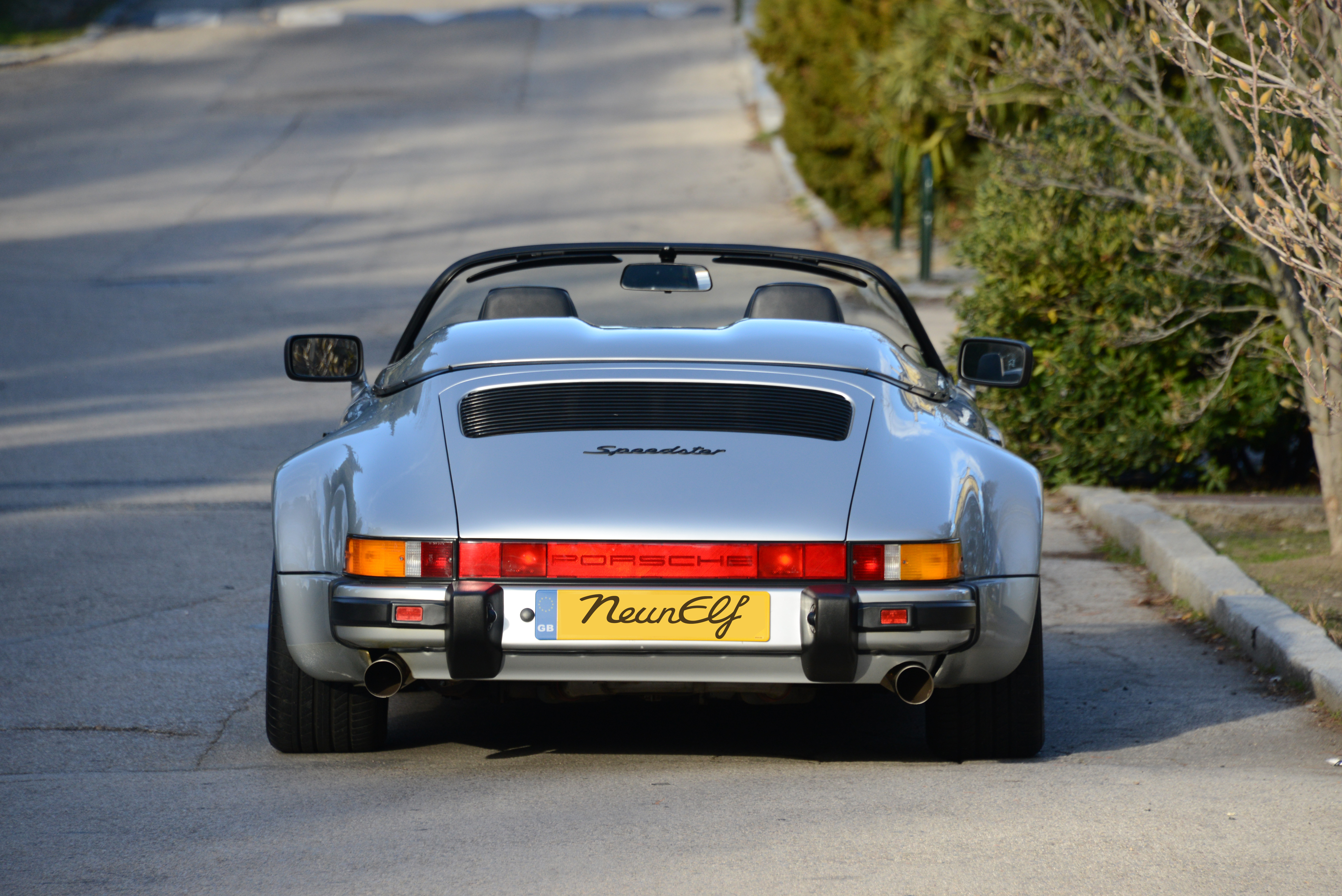 Previous two pictures:  This rear view of the Speedster shows her beauty in her most recognizable perspective: her backside, curvy, strong, powerful, 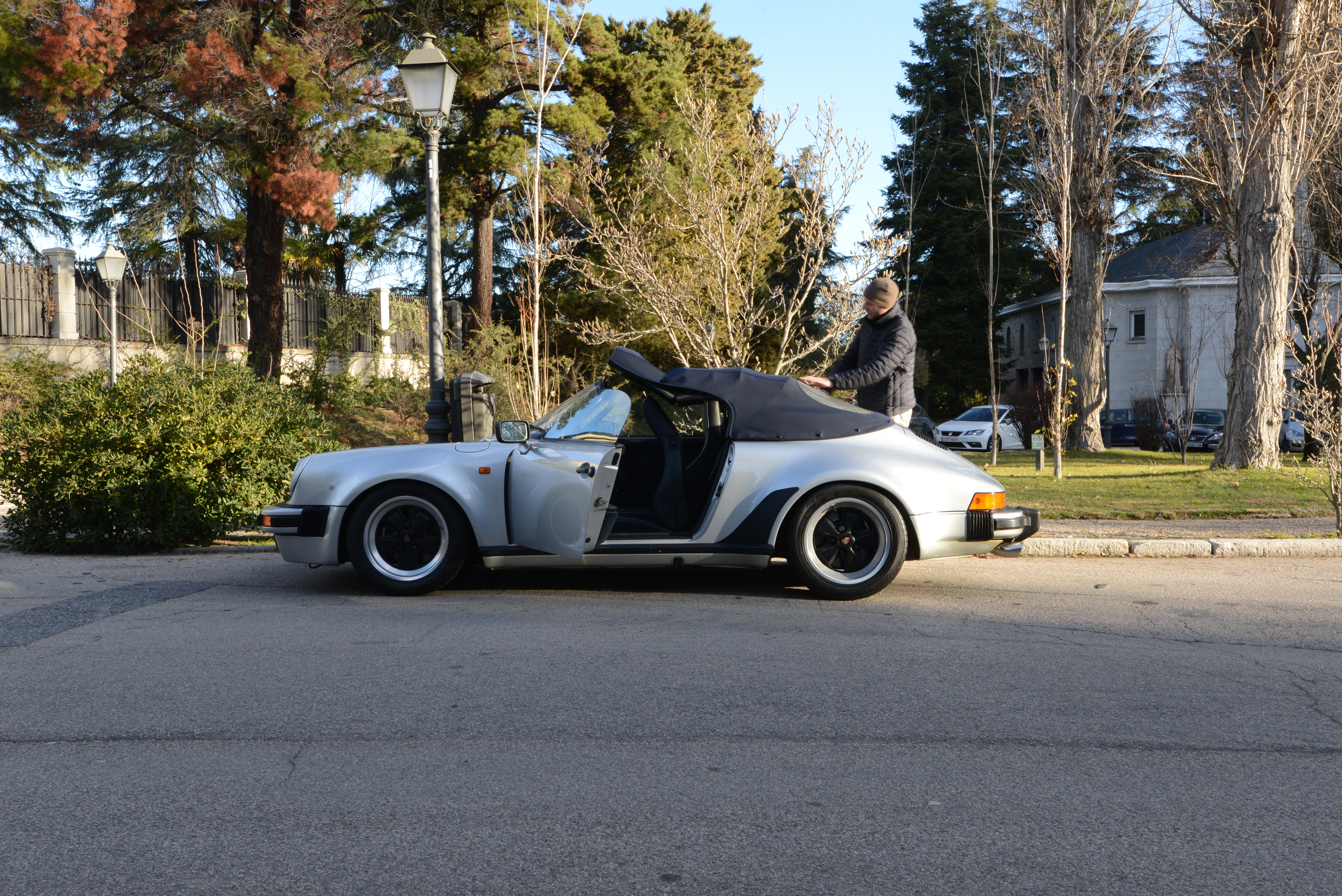 The sleek and elegant silhouette is immediately recognizable thanks to the low windshield and the bubble that covers the space former used by the backseats common to all 911s and now used as storage space for the canvas top of the car, 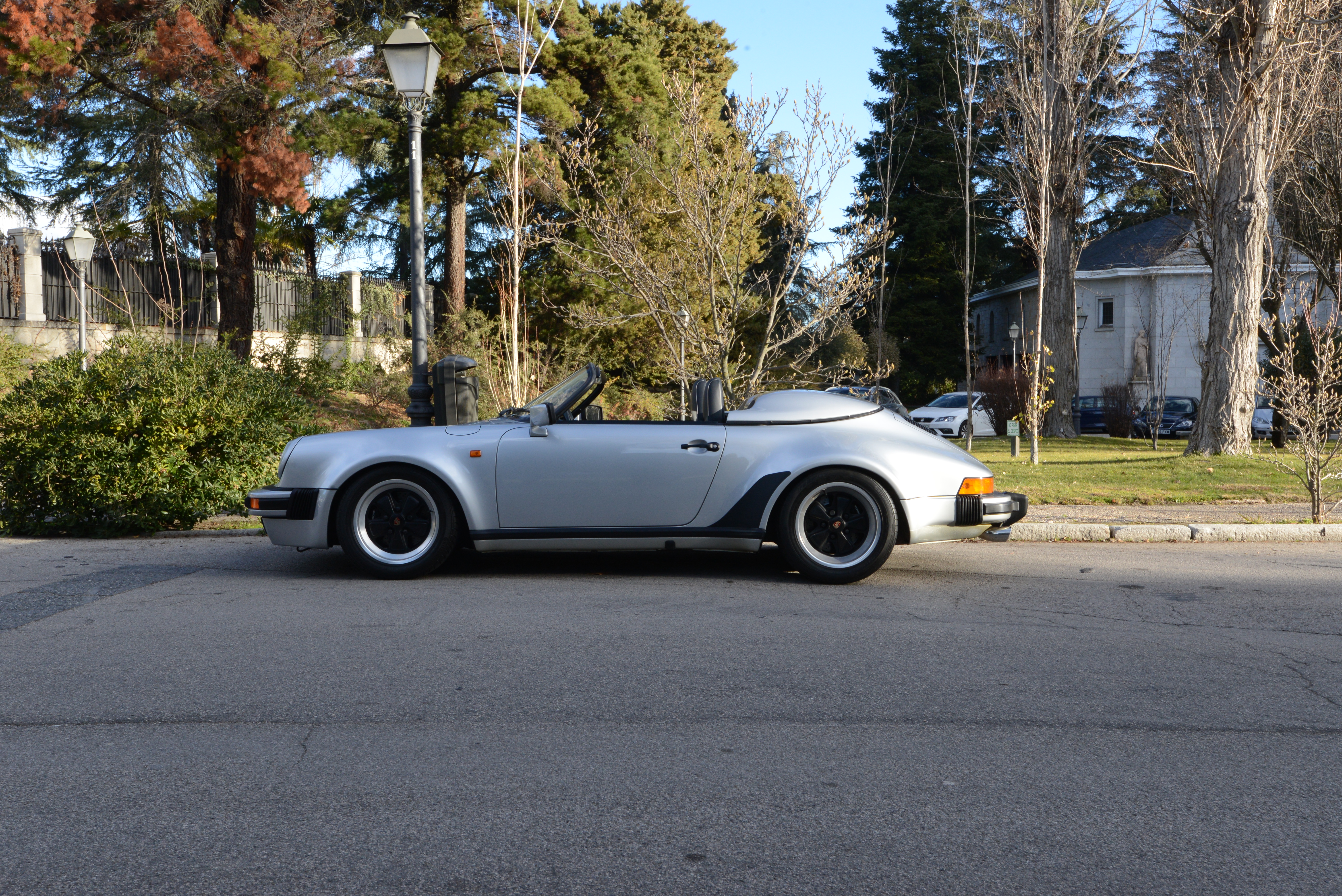 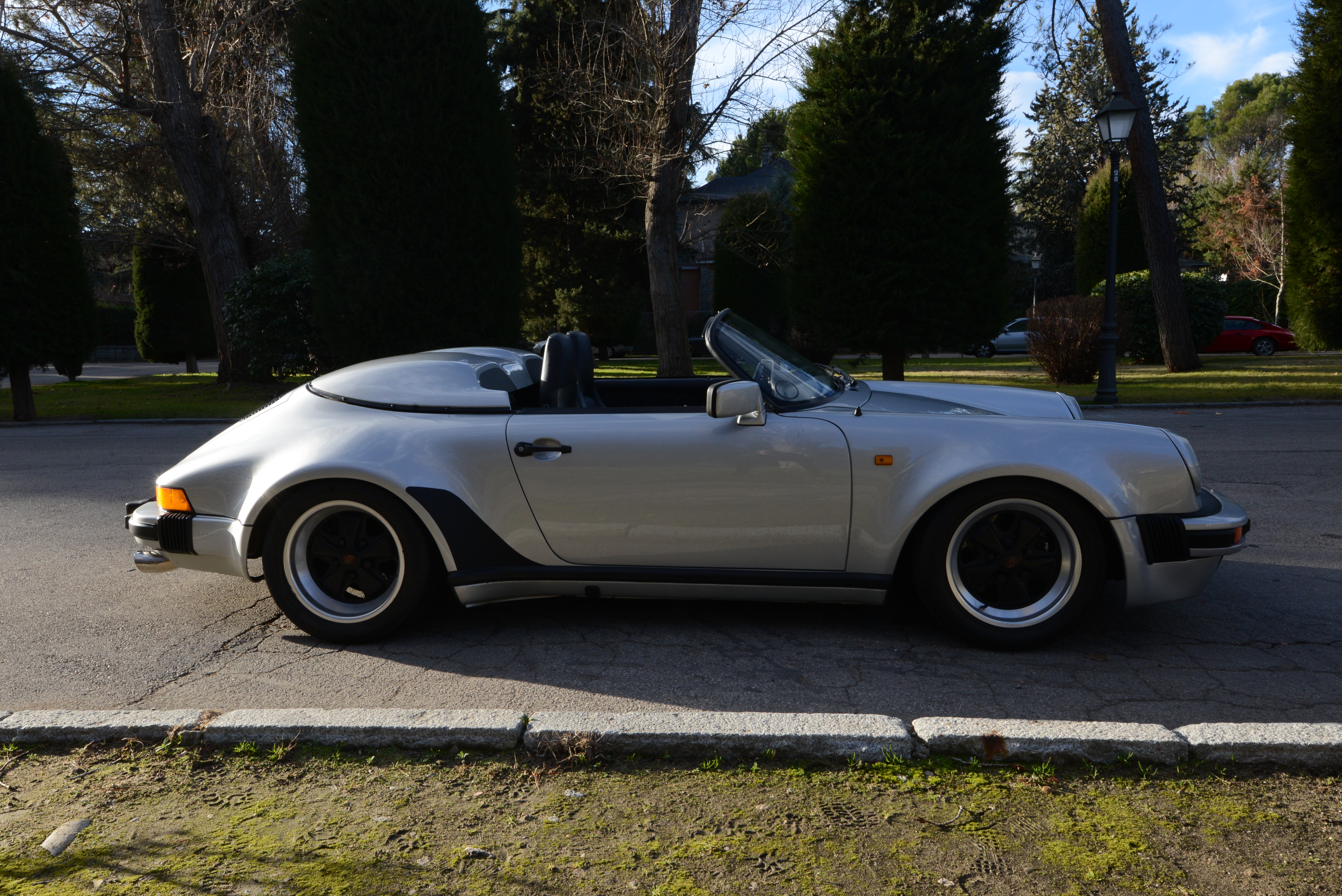 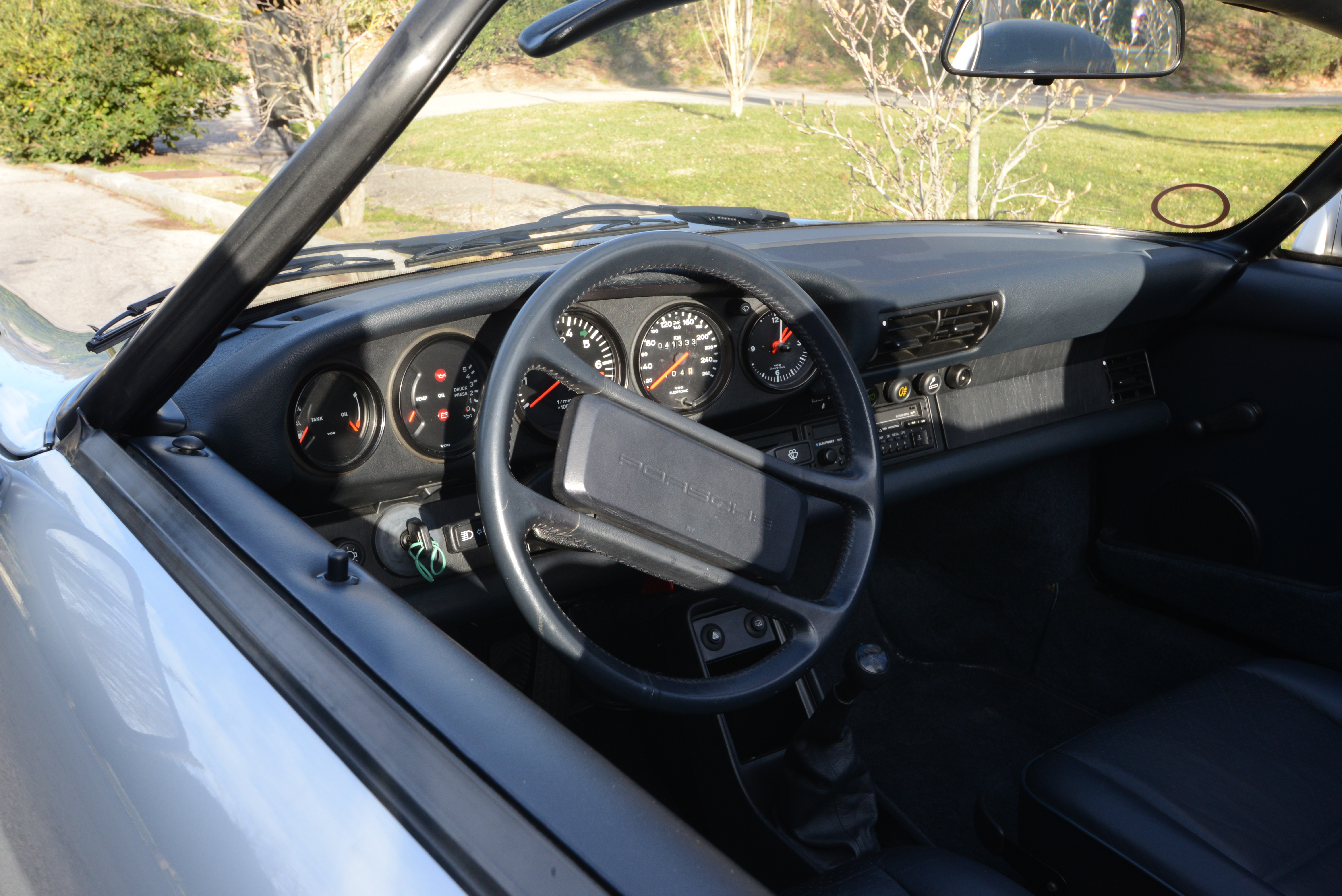 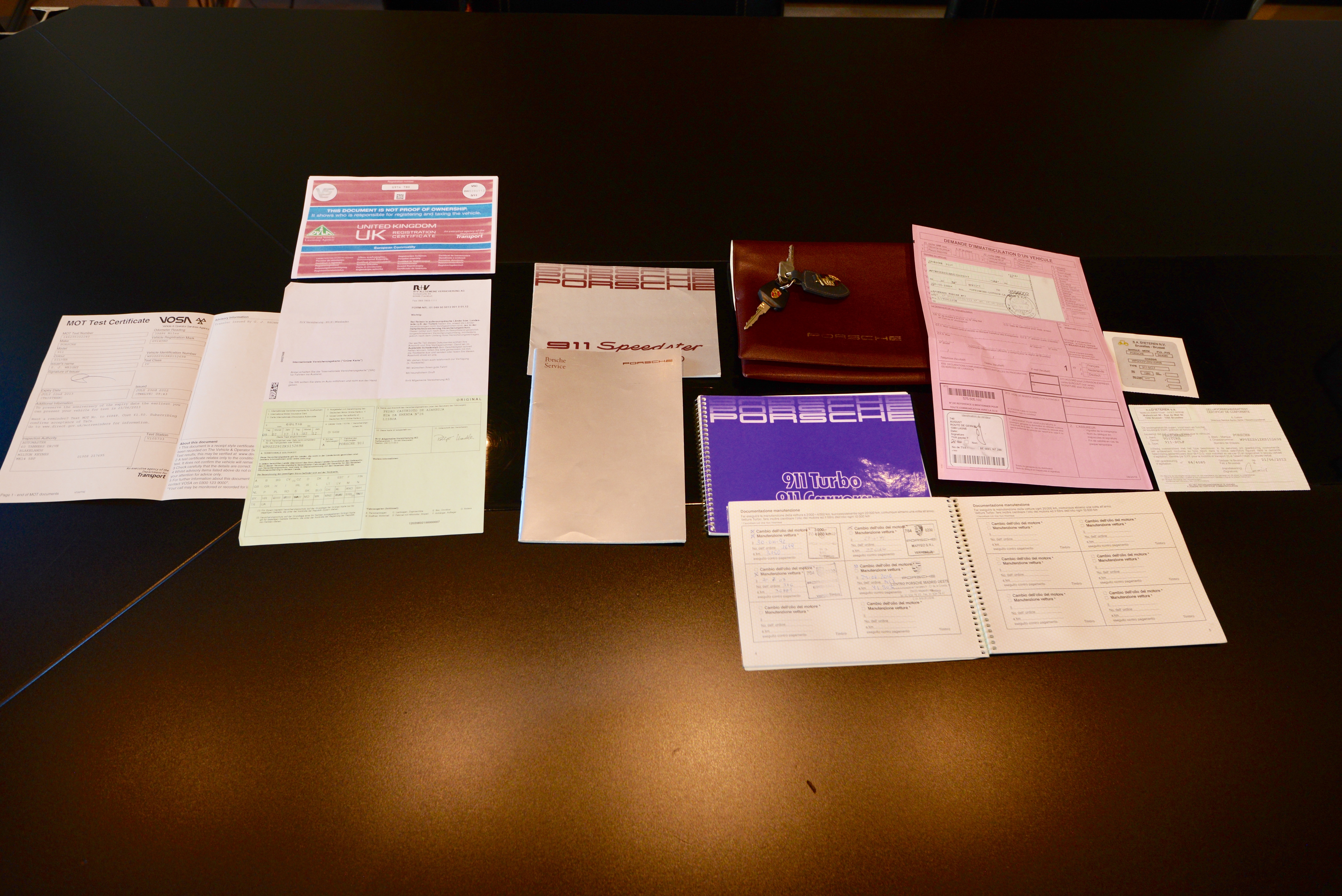 With a complete traceable history, this unit is ready to move on to the hands of a discerning collector or “aficionado”. The asking price close to €218.000 signals the particulars of the transaction which are open for discussion considering that a part exchange is an option.