A very special Moonwatch: for the first time, only available on-line

The Speedmaster was not originally designed for space exploration. Instead, it was introduced by Omega in 1957 as a sport and racing chronograph and it was in June 1965 that was worn during the first American spacewalk as part of NASA’s Gemini 4 mission. It also was the first watch worn by an astronaut walking on the Moon during the Apollo 11 mission, hence the world wide known nickname, and now commercially used, “Moonwatch” designation.]

The first Speedmaster model was powered by the Omega Calibre 321 movement. This movement was developed in 1946 by Albert Piguet of Lemania, which had been acquired in 1932 by Omega’s parent company, Société Suisse pour l’Industrie Horlogère. The “Speedmaster” name was coined from the model’s novel tachymeter scale bezel and by the convention set by prior Omega brands Seamaster and Railmaster.

The model established the series’s hallmark 12-hour, triple-register chronograph layout, domed Plexiglas crystal, and simple, high-contrast index markers; but, unlike most subsequent Speedmaster models, it used Omega’s broad arrow hand set. In 1959, a second version was released with a black aluminum base 1000 bezel and later a tachymeter 500 bezel and alpha hands. This was again updated in 1963 keeping the alpha hands and then less than one year later references ST 105.003 with straight baton hands and ST 105.012, the first Speedmaster with the “Professional” appellation on the dial, with an asymmetrical case to protect the chronograph pushers and crown.

All of the early Speedmasters used the same Calibre 321 movement, which was only replaced in 1968/1969 with the introduction of the Calibre 861 movement, used in the “Moonwatch”. The watches used for Apollo 11’s mission were the 1967 “pre-Moon” 321 versions. 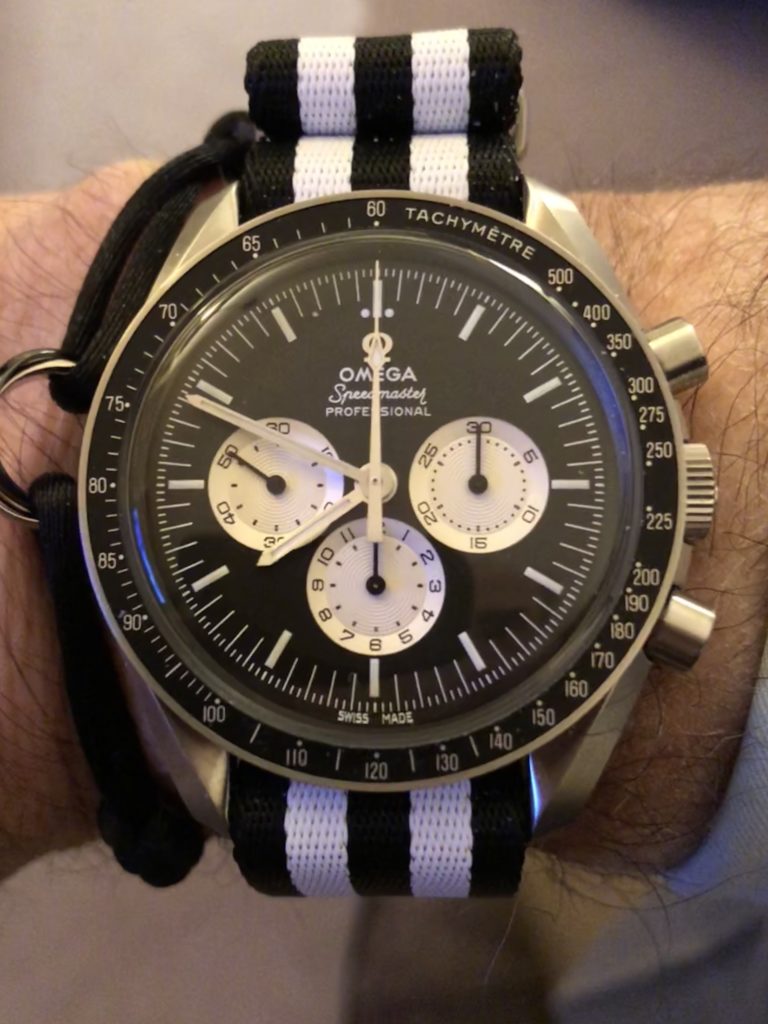 Inspired and enthused by such an iconic watch, Fratello watches founder Robert-Jan Broer created the hashtag #SpeedyTuesday and for all Omega fans it means that Tuesday is the day to celebrate the many editions of the company’s best known model.

Then, on January 10, 2017 at noon (GMT), acknowledging Mr Broer enthusiasm and dedication to the Speedmaster, Omega announced through its Instagram account, the launch of the Speedy Tuesday Limited Edition, a Speedmaster Professional with a reverse panda dial and and luminescent radial sub-dials. 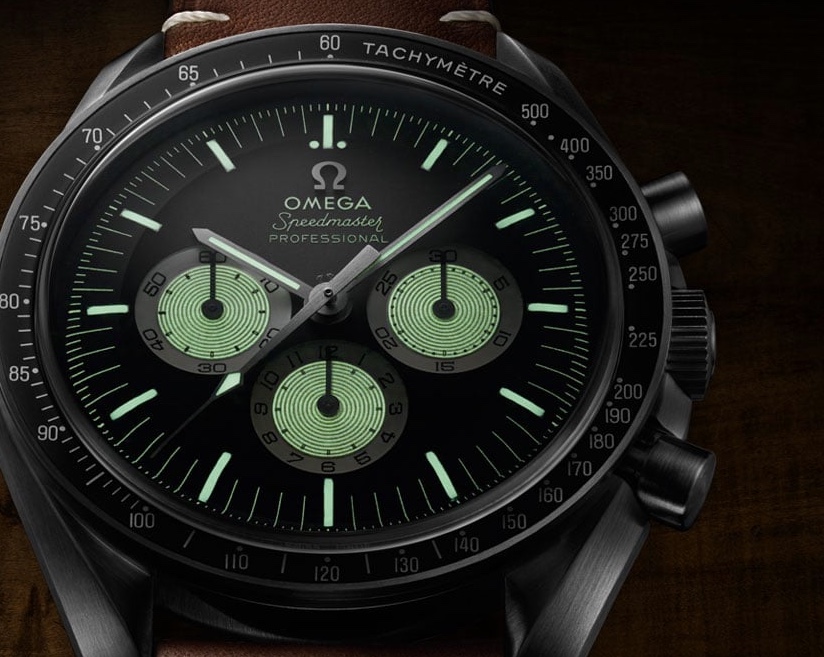 Only 2,012 pieces were made and this was the first time Omega gave customers the chance to order one of its watches online and as of 11:00 AM US Eastern Standard Time, Omega said that all 2012 pieces of the Speedy Tuesday Limited Edition have been temporarily allocated. 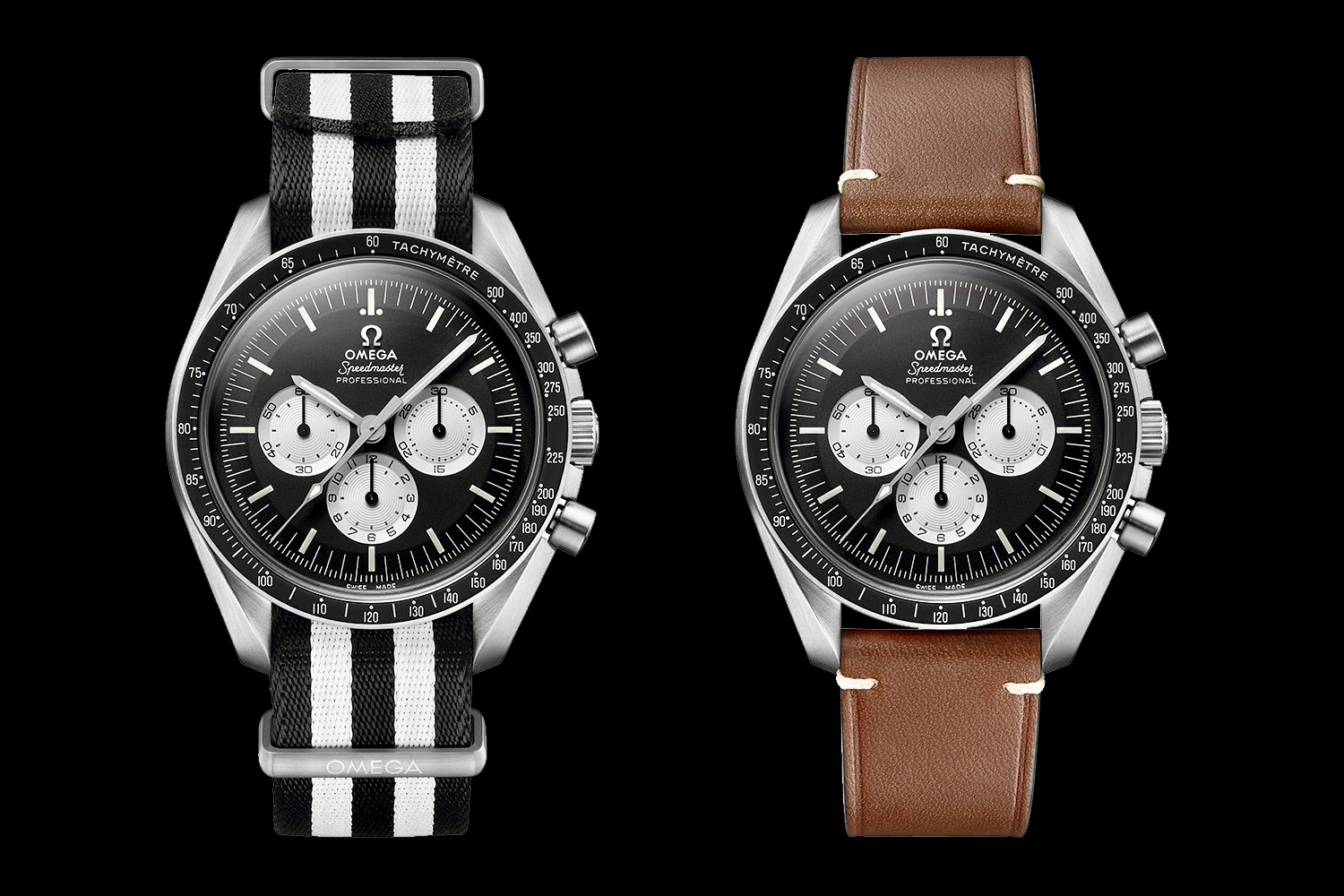 By sheer chance, NeunElf was, at that precise moment, browsing through Hodinkee on-line site (a highly recommended activity for any serious watch fan) and learn about the opportunity. Said and done, we subscribed for one of the pieces that finally reached our hands, being delivered by the Omega Madrid boutique 10 months later. 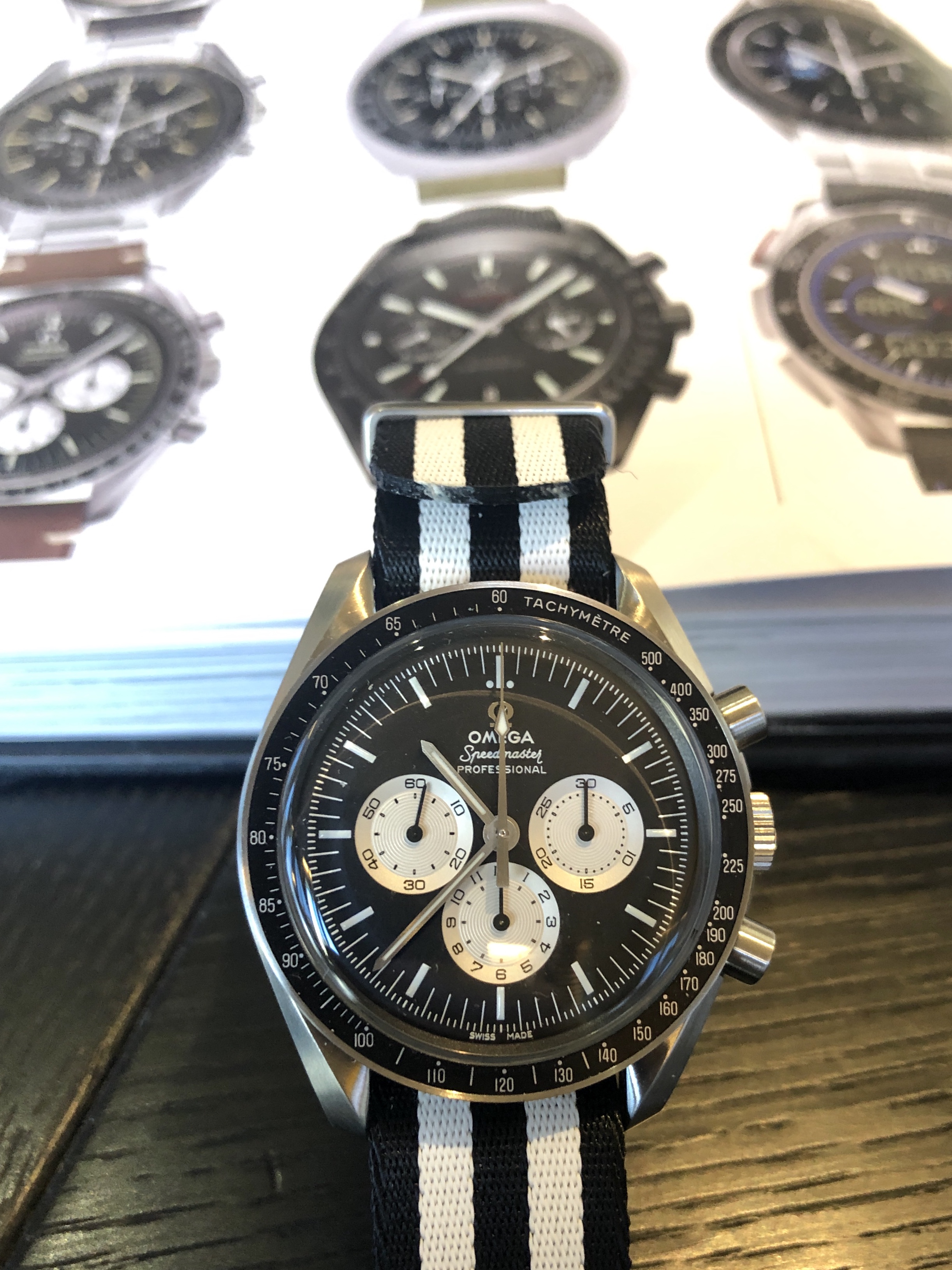 Says Hodinkee: “The design of the Speedy Tuesday is inspired by Omega’s Speedmaster Alaska Project III, a model created for NASA in 1978. It comes in a 42mm Professional case, and it is powered by the hand-wound calibre 1861. Each timepiece will come with a special leather watch roll containing a black and white NATO strap with #SpeedyTuesday stamped on the strap’s loop.” 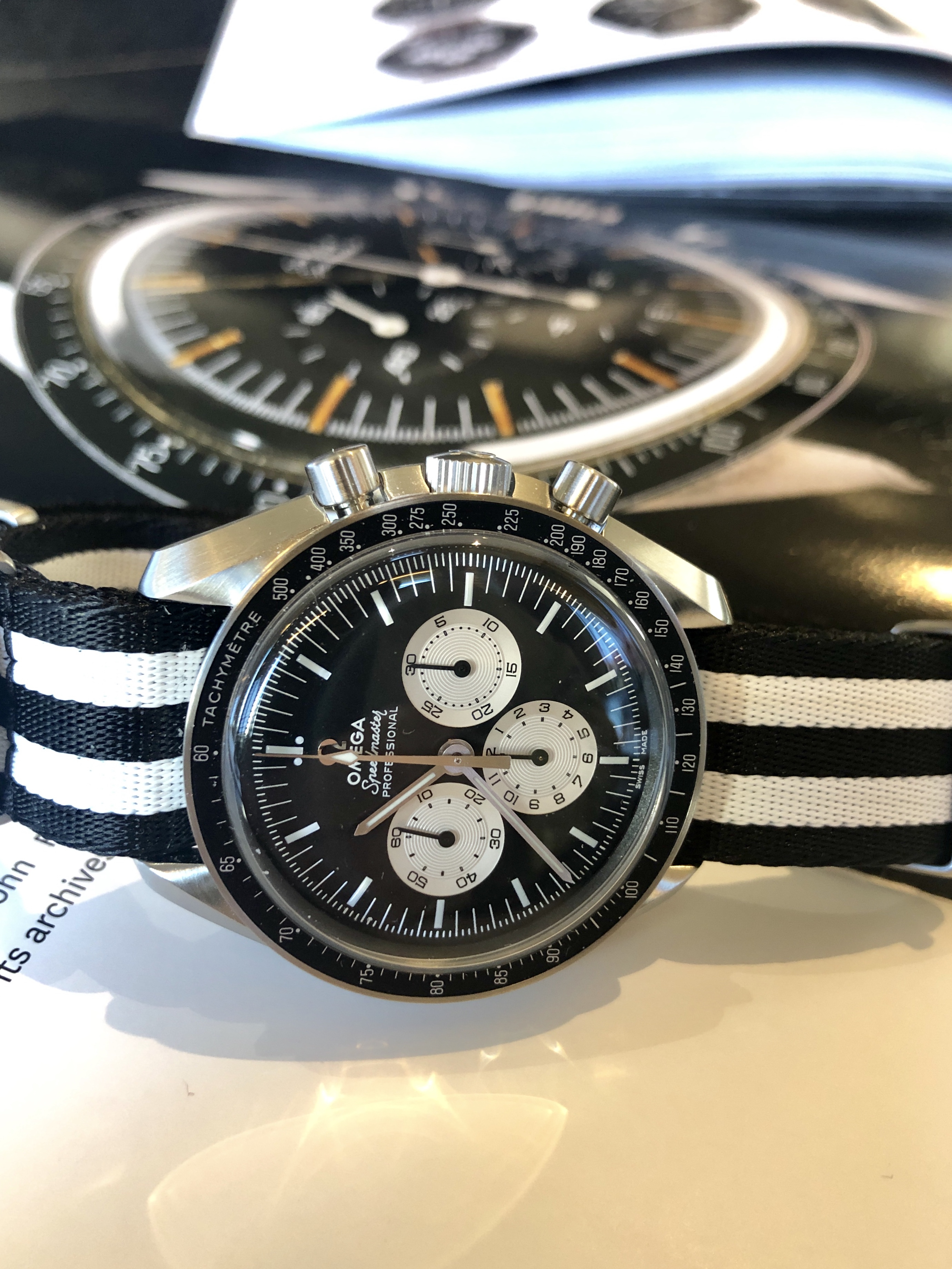 And this is the Speedy Tuesday set, including a black and white NATO strap with #SpeedyTuesday stamped on the strap’s loop.

The watch looks gorgeous in its black and white NATO strap… 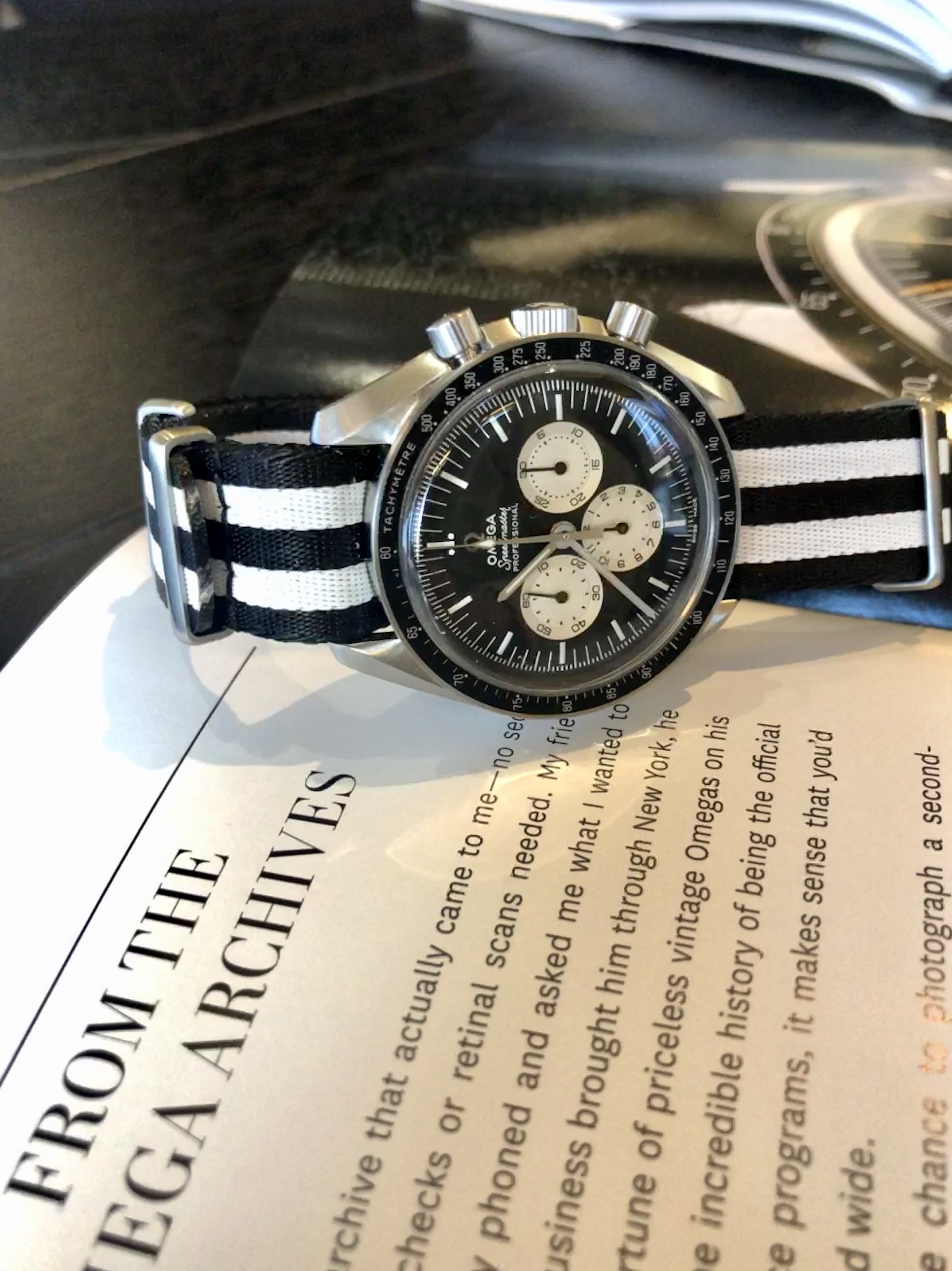 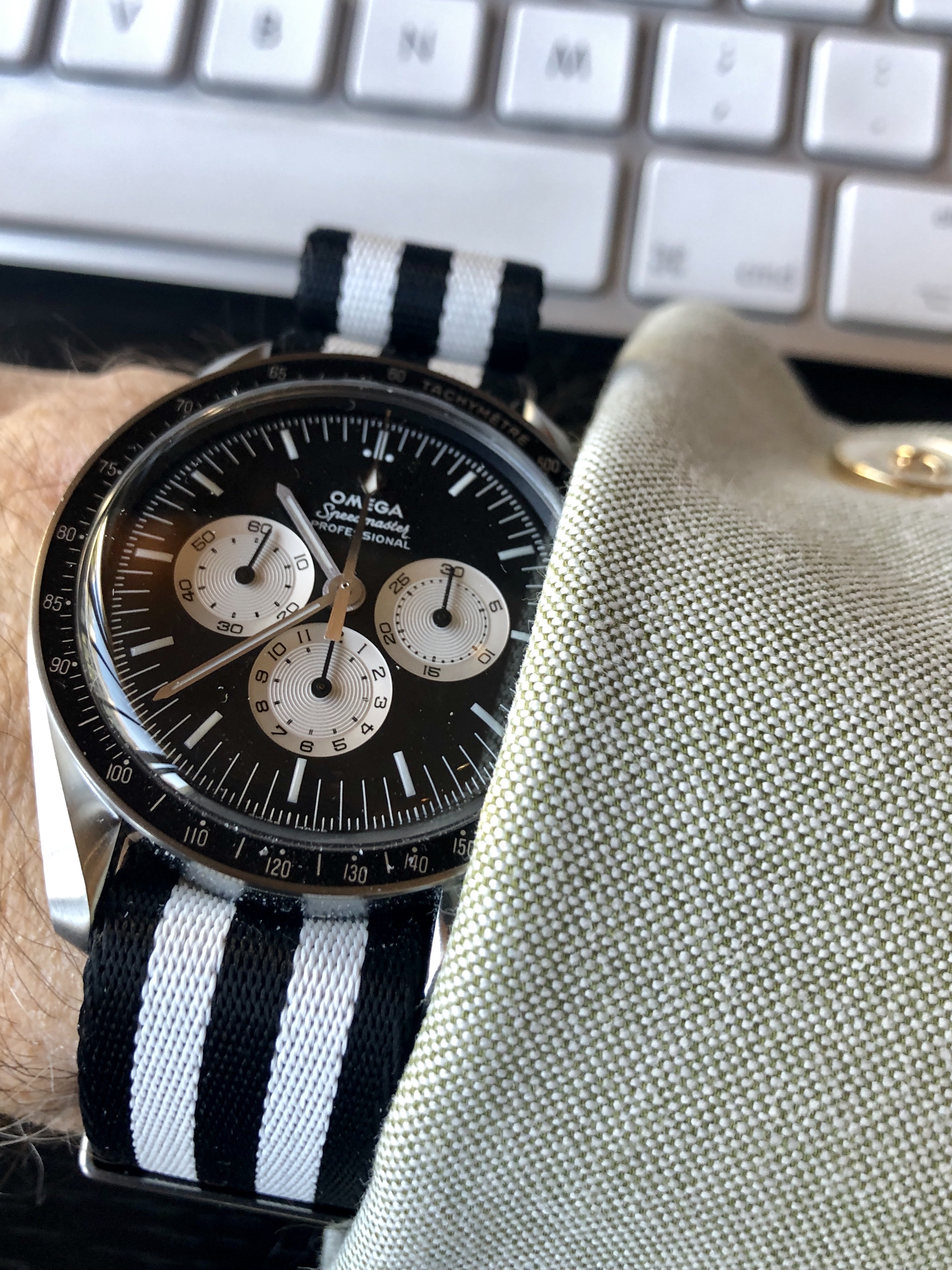 Thanks Omega, Fratello Watches, Hodinkee and, of course, Wikipedia.