The end of a saga: the last naturally aspirated 911 engine 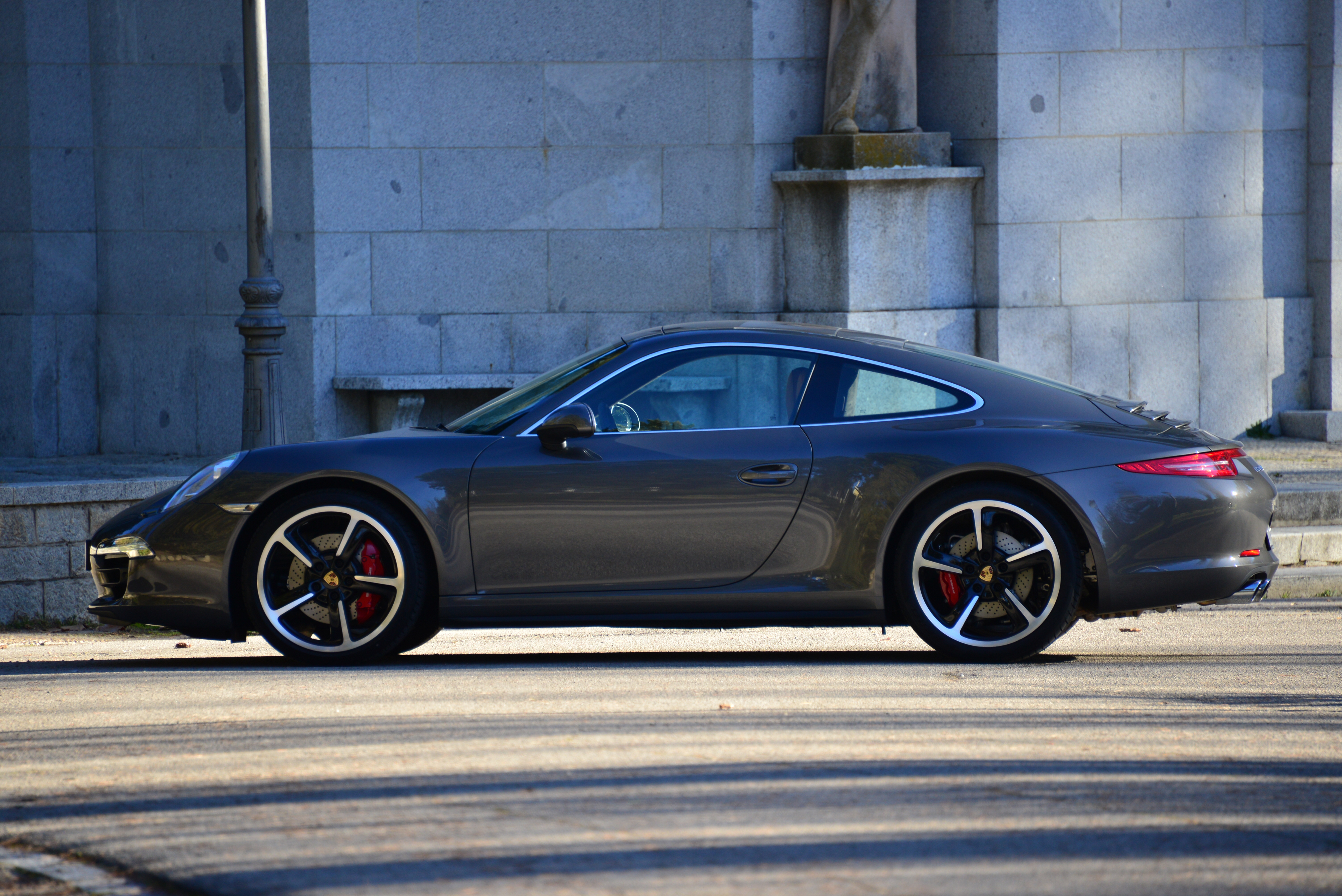 Porsche president and chief CEO Matthias Muller couldn’t be accused of lacking confidence when he introduced  the 991-generation Porsche 911 at the Porsche Museum, Stuttgart.

‘Technologically and visually the car is a masterpiece’, he says. ‘I don’t think I am promising too much here. I already know this car, I know it at detail level; the engineers took a basically perfect car and improved it again. The new 911 is the best 911 of all times’. 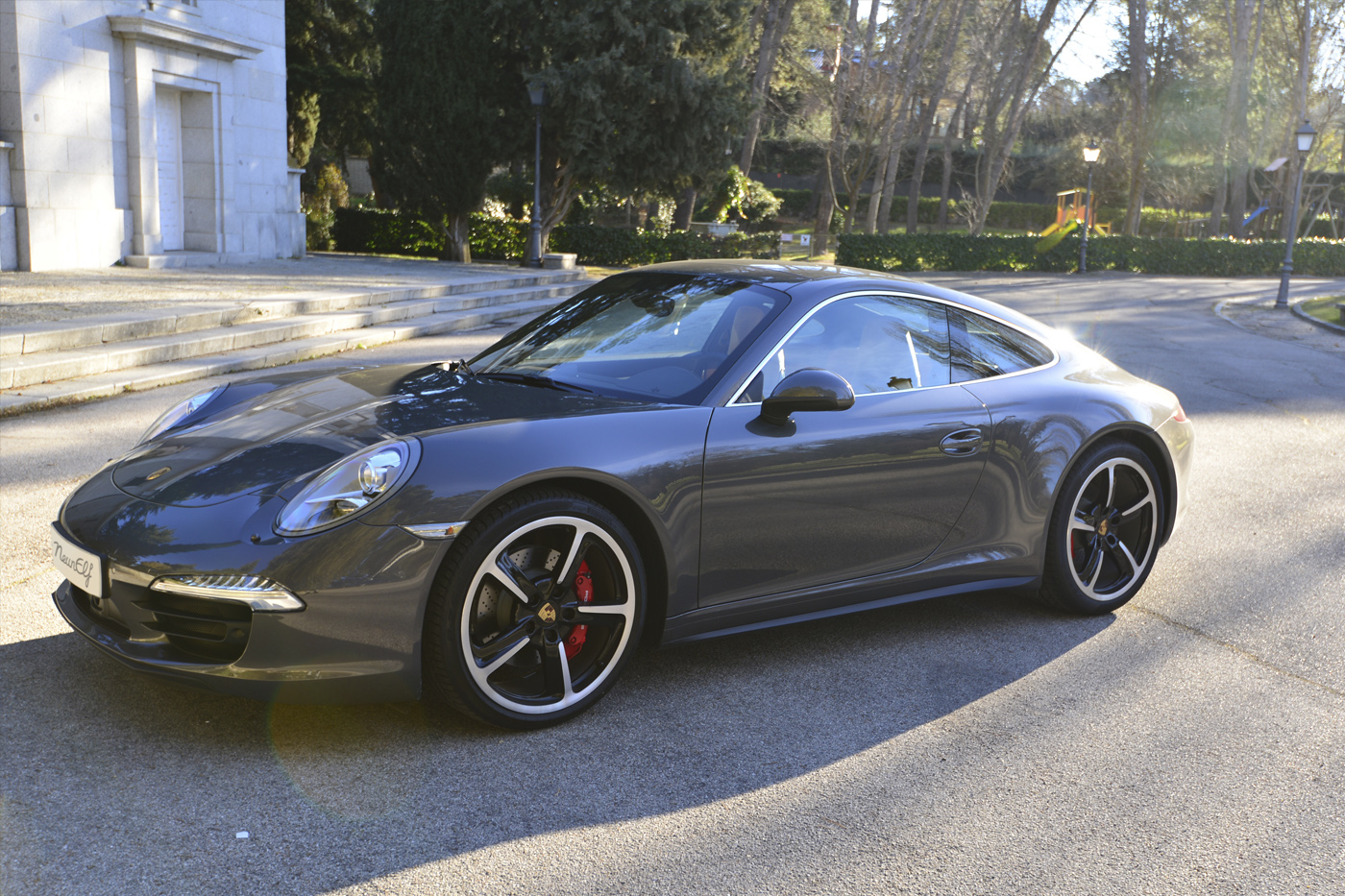 The Porsche 991 is the internal designation for the seventh generation of the Porsche 911 sports car, which was unveiled at the 2011 Frankfurt Motor Show as the replacement for the 997. The 991 is an entirely new platform, only the third since the first 911 launched in 1963 (the 996 of 1999 being the second new platform).

Compared to the 997, the 991 is slightly larger, with the wheelbase increased by 100 mm to 2,450 mm, and the overall length up by 70 mm to 4,490 mm. A new transaxle was developed so that the rear wheels could be moved 76 mm backward in relation to the position of the engine, which significantly improves the weight distribution and cornering performance of the car. 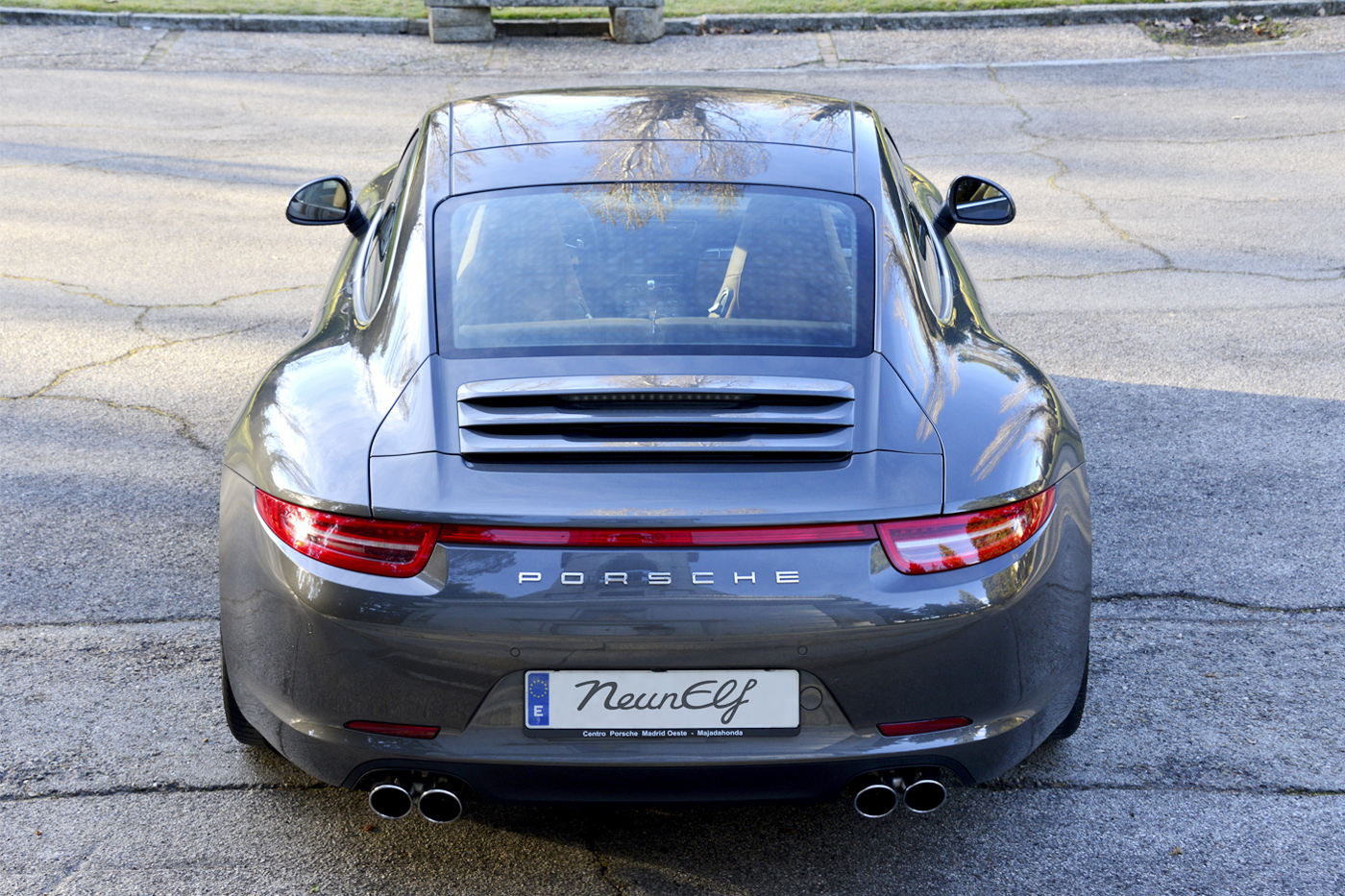 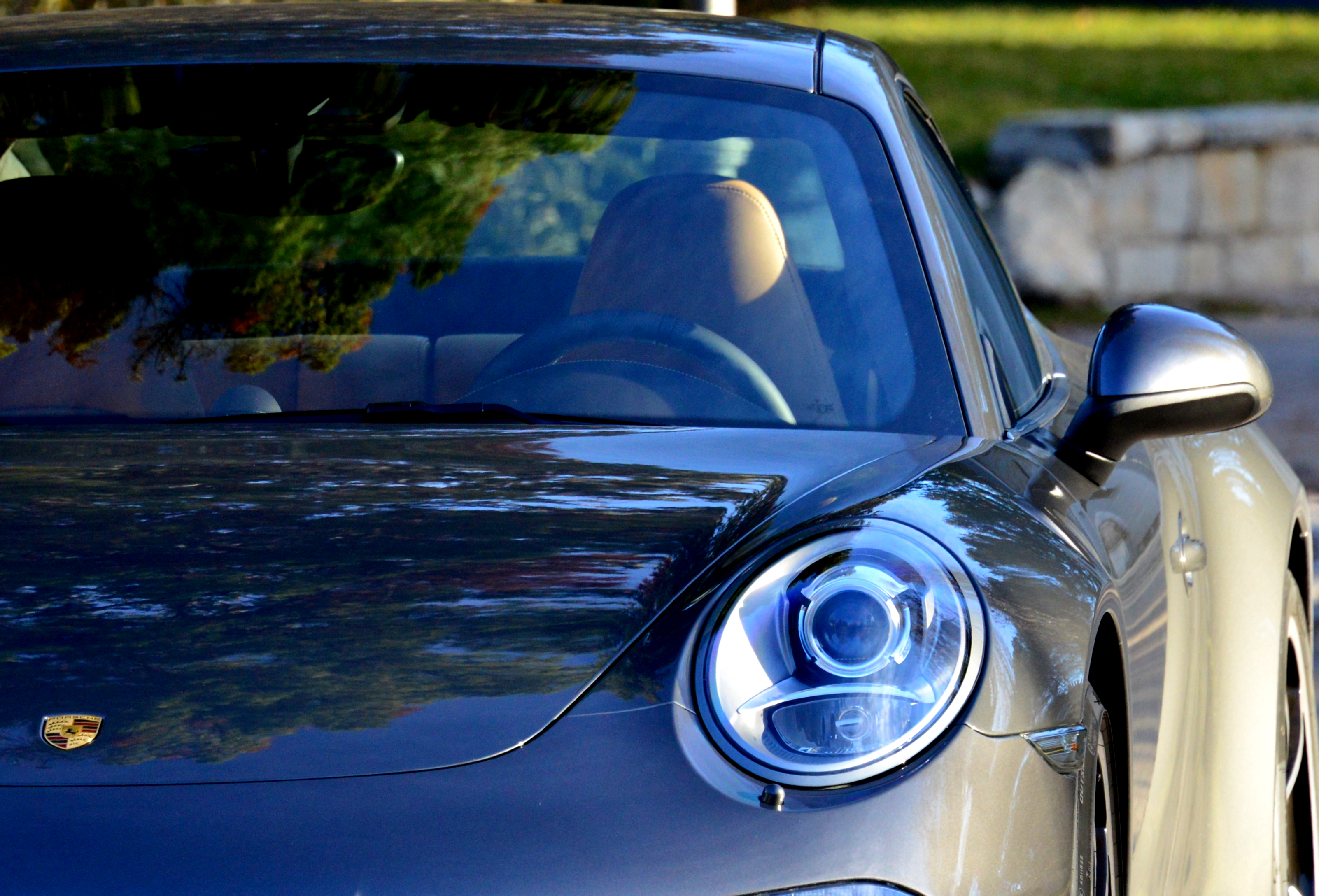 In January 2014, Porsche introduced the Targa 4 and Targa 4S models. These new derivatives came equipped with an all-new roof technology with the original “targa” design, now with an electronically operated soft top along with the original B-pillar and the glass ‘dome’ at the rear

One year later, Porsche announced the 911 Targa GTS . Similar in appearance to the existing Targa 4 and 4S models, the GTS added the 430 PS (424 bhp) engine plus several otherwise optional features

The GT3 variant (see below) was added to the 991.1 line up at the 2013 Geneva Motor Show equipped with Porsche’s new active rear wheel steering. The system is claimed to provide higher lateral dynamics than previously available by the manufacturer. Car speed inputs determine whether the rear wheels steer in the same or opposite direction of the front wheels. It is the first GT3 model to be offered only with an automatic transmission.

Early in 2014, deliveries of the GT3 were halted following two incidents of the car catching fire. A subsequent recall to replace the engines of all 785 cars manufactured at that time was announced in March 2014 before production of the GT3 would restart.

Porsche launched the RS version of the 991 GT3  in 2015. Aesthetically, compared to the 991 GT3, the front fenders are now equipped with louvers above the wheels and the rear fenders now include intakes taken from the 911 Turbo, rather than an intake below the rear wing. The roof is made from magnesium. The interior includes full bucket seats (based on the carbon seats of the 918 Spyder), carbon-fibre inserts, lightweight door handles and the Club Sport Package as standard (a bolted-on roll cage behind the front seats, preparation for a battery master switch, and a six-point safety harness for the driver and fire extinguisher with mounting bracket).

The 3.8-litre unit found in the 991 GT3 is replaced with a 4.0-litre unit with generating a maximum power output of 500 PS (493 hp) and 460 N⋅m of torque. The transmission is PDK only. The car is able to accelerate from 0-100 km/h (62 mph) in 3.3 seconds  and to 200 km/h in 10.9 seconds. The 991 GT3 RS also comes with functions such as declutching by “paddle neutral” — comparable to pressing the clutch with a conventional manual gearbox – and a Pit Speed limiter button. As with the 991 GT3, there is rear-axle steering and Porsche Torque Vectoring Plus system with fully variable rear axle differential lock.

Excitedly expected and anticipated since late 2015 and unveiled in Geneva on March 1 2016, the 911 R shares most of its underpinnings with the GT3 RS, but does not include the roll cage, rear wing, and associated bodywork for a weight saving of 50 kg (110 lb). The 911 R comes only with a 6-speed manual transmission, and has a top speed of 323 km/h (201 mph) due to a lower drag coefficient as compared to the GT3 RS. It also offers additional options including a lighter flywheel and removal of the air conditioning and audio systems. Production was limited to 991 examples, and became instantaneouslly a highly priced collectors item, which provoked some unease amongst Porsche fans who saw prices skyrocketing at once, fired by speculation provoked by owners totally focused on making quick money without enjoying (by driving them) their cars. 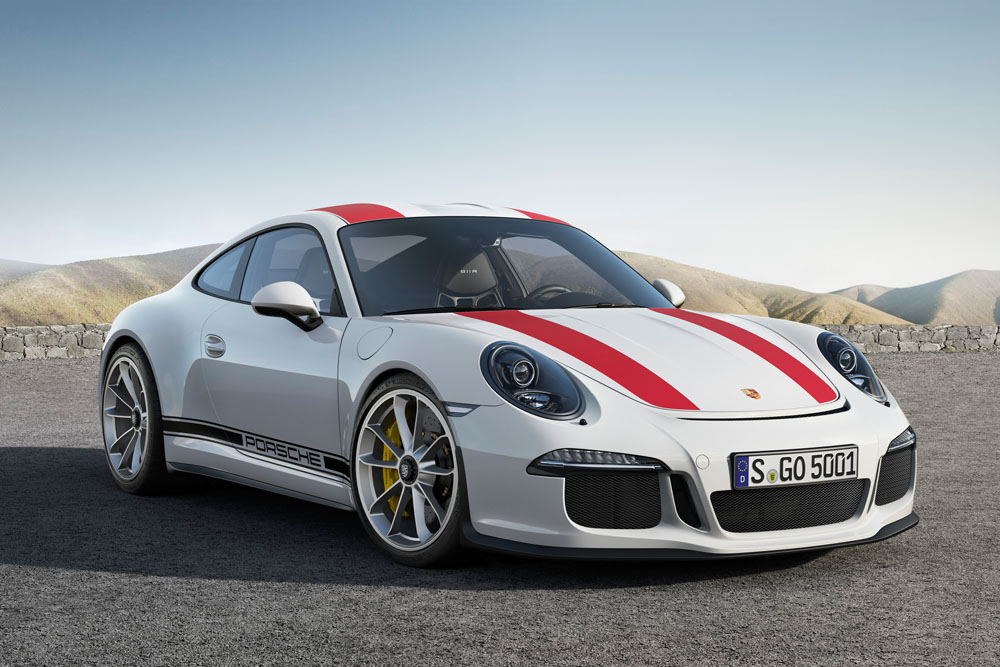 But the 911 R would not be the latest imaginative iteration of the 991.1 range and its fantastic naturally aspirated engine.

At the 2018 Paris Motor Show held in October on the occasion of the 70th anniversary celebration of the marque, Porsche unveiled the Speedster variant of the 991 generation for the 911, as a concept. Utilizing the chassis of the GT3 and the body shell of the Carrera 4 Cabriolet, the Speedster includes the GT3’s 4.0-litre naturally aspirated Flat-6 engine generating a maximum power output of 500 PS (493 hp) and having a red-line of 9,000 rpm coupled with a 6-speed manual transmission and titanium exhaust system which are claimed to be 4 kg lighter than the 7-speed manual transmission found on the standard 991 models. The car also features the signature “hump” shaped double bubble roof cover along with a shorter windshield frame, side window glass and the analogue roof folding mechanism retaining the “Talbot” wing mirrors and the central fuel cap from the 911 Speedster concept unveiled earlier at the Goodwood Festival of Speed harking back to its use on the 356  Speedster. Production will be limited to 1,948 units in honour of the year in which the 356 “Number 1” gained its operating license.

The final production version of the Speedster was unveiled at the 2019 New York Auto Show in April and dropped the “Talbot” wing mirrors in favour of standard 991 wing mirrors. The speedster is available for sale since early May 2019.

Over more than 50 years since the introduction of the 911, Porsche has accomplished several breakthroughs. Over all, the development of their last-6 air-cooled engine from the 2.0 liter of 160 HP in 1964, up to the latest 993 Turbo version delivering 402 HP back in 1995. The all-wheel drive traction with the introduction of the 964 in 1989, the first water cooled engine from 30 years of air-cooled motors introduced in 1997 on the 996 model, the expansion and improvement of water cooled engines from the 996 Carrera delivering 296 HP to the 424 HP delivered by the 2014 Carrera GTS…

And yet, leaving apart all turbo versions of all this series it is the personal appreciation of the author of this OPINION that the 991.1 Carrera 4S  is one of the most complete, forgiving, pleasurable, exhilarating, comfortable, affordable, all-rounder, daily-driver sports car that Porsche has ever manufactured with a naturally aspirated engine under the bonnet.

It is, and will be, a car to remember after the arrival of turbo boosted engines across the range of all 911s since the 991.2, the foreseeable arrival of hybrid 911s, and the irremediable generalization of electric powertrains in future 911s. Mark my words… 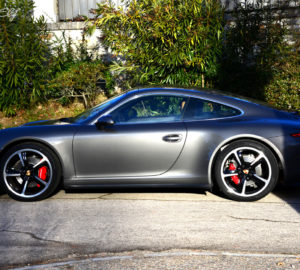 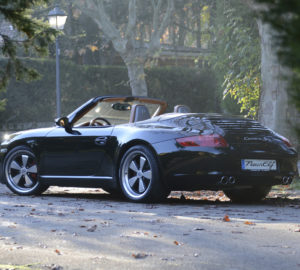